Dealing With Disruption: A Tale of Two Generators and a Food Transporter

Just when you thought you planned for disruption, a year like 2020 came along.

Events such as a global pandemic, a charged political climate, an economic recession and a few natural disasters forced many organizations to take another look at Cloud migration.

However, there are still organizations busy reacting to disruptions, instead of finding ways to use technology to forge ahead. Some hope they can make the move to the Cloud at a later time.

But hope is not a strategy. Neither is an expensive generator, as two companies learned the hard way.

Flooded Out by a Hurricane in South Florida

“We had a customer several years ago who was in South Florida and I was talking to them about moving to the Cloud,” said Kevin Armstrong, Enterprise Strategy Leader at Enavate.

The company insisted they had a strategy in place. It turned out to be a brand new generator.

“I flew down to visit them and they said, ‘Look at our brand-new generator!’ And it was massive. It was pretty impressive. They told me the generator was their strategy. That was how they were going to make sure they had an uptime guarantee because it was critical from cradle to grave that they had visibility of their inventory,” he said.

“‘I’ve got the servers in the car and I'm driving up there because we have no power. I'm going to go check into a hotel and plug them in. And that’s how we're going to run our servers from the hotel because they have power.’ I was dumbfounded,” Armstrong said.

As for the generator? The IT director paused for about 10 seconds and said, “It's underwater. It's not working."

“They spent half a million dollars on a generator they planned to run the entire enterprise, not just the data, and it’s not just about the ERP, it’s about everything. But it ended up being damaged badly in the storm with being flooded, and it didn't work,” Armstrong said.

The client then asked how quickly Enavate could fix things. Fortunately, Enavate was able to start the process within a few days.

The moral of the story: “A generator isn’t always the thing that’s going to save you,” Armstrong said. 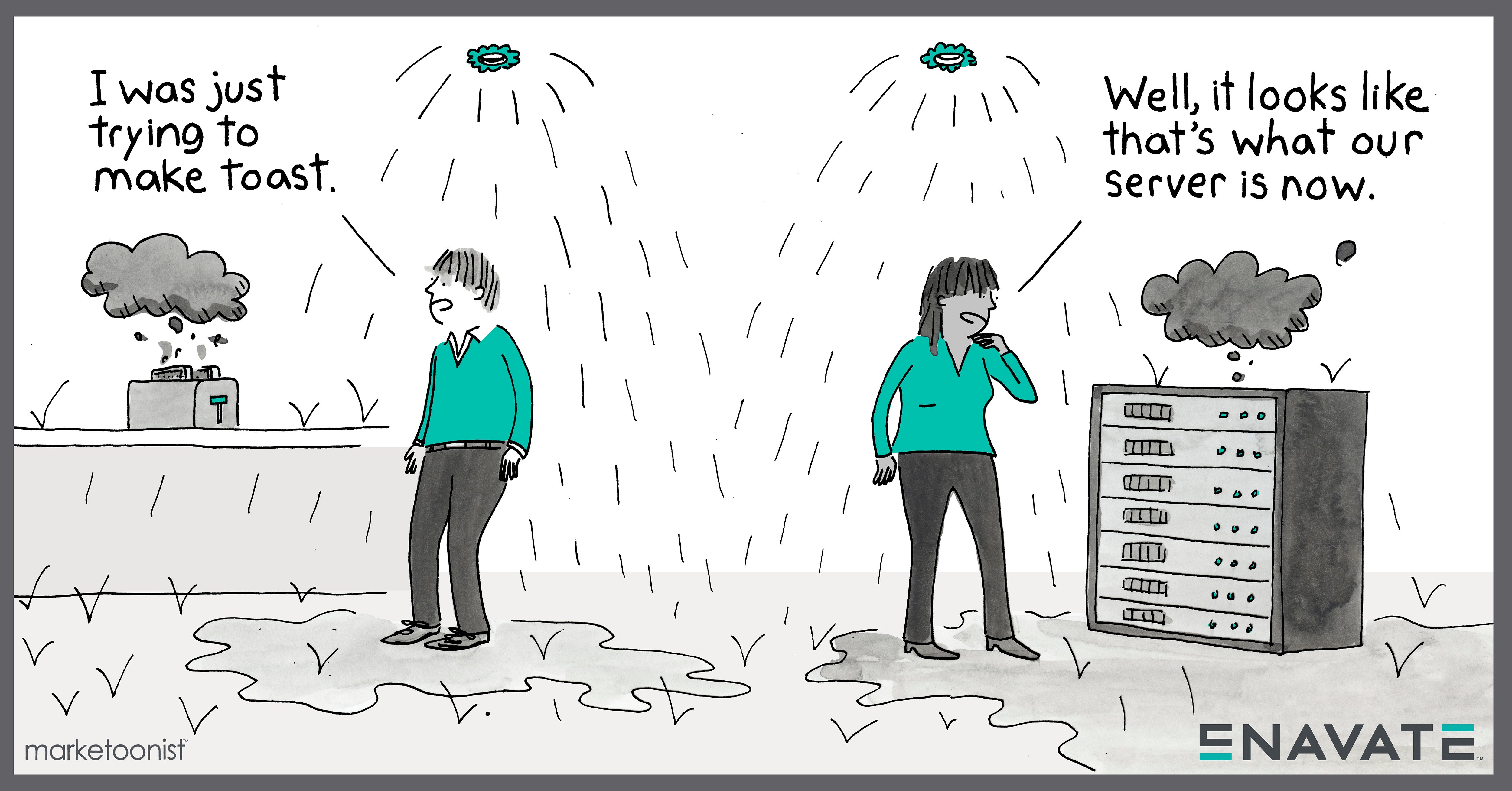 Russ Riley, Director of Cloud Services at Enavate, had been talking to a professional services client with offices on the top two stories of a building in downtown Tampa about “their redundancies and how they can operate in a time of challenge.”

“I was taken up to the roof of the building and there was this big generator. And I said, “Well, that’s great. Behold a storm came through the Tampa Bay area and luckily, did not come directly on shore. It was offshore, but still strong enough winds to cause a lot of havoc,” he said.

The storm flung part of the building’s roof and the generator into nearby Hillsborough Bay.

“They were down and out of business for quite a while. It was painful for them,” Riley said.

The moral of the story: “We can always think we have the best strategies, but continuing to look at what we’re doing, how to maintain business … it should always be Business 101,” he said.

The Food That Got Delivered

Companies that adopt a forward-thinking approach to technology can do more than simply adjust after a disruption strikes, as a food distribution company out of Atlanta learned. The company’s chief information officer told Riley about how they were able to keep sending trucks all over the country when the pandemic first hit.

“‘I don’t know if we just got lucky, or if we, together, thought about this the right way, but your team helped us with this Virtual Desktop Infrastructure, along with our ERP and our mission critical applications. And we did that with you. Since we’ve been challenged by this pandemic, we haven’t missed a beat,’” he said.

“At that time, the pandemic was early. I think we all remember food was difficult at times to even get your hands on,” Riley said.

The company was able to send people outside of their offices. People were able to do their job, the trucks rolled and literally, food got delivered.

The moral of the story: “How technology enabled a business not only to function, but at this time, deliver what I call ‘mission critical food stuff’ to many of us that we probably enjoyed,” Riley said.

Want to learn more about best practices for managed ERP in the Cloud for your organization? Hear the story straight from Kevin and Russ, REAL TALK on Your Dynamics ERP Migration Strategy. No matter where you are in your Cloud journey, if can use some REAL TALK about Cloud, connect with one of our experts to help you map out your route.

Roselle Cronan is Content Marketing Lead at Enavate. She uses her writing and editing skills to share Enavate’s “Why”: Transform businesses and the lives they touch. Inspired and empowered, Roselle challenges herself to position Enavate as THE partner for ERP and Cloud implementations. Outside of work, Roselle supports the Alabama Crimson Tide, reads a lot, enjoys live music and takes part in Tampa’s Gasparilla parade (aka Mardi Gras with pirates). She lives in Riverview, Florida, with her cat, Cleo.

Enavate’s Suite of Power BI Training Programs: Something for Everyone

Microsoft Power BI is known for being user-friendly; a tool that anyone can use to improve their business. However, to make the most of your experience and get the best... END_OF_DOCUMENT_TOKEN_TO_BE_REPLACED
Microsoft Dynamics GP
January 16, 2023

Knowing how to close out your Microsoft Dynamics GP instance can be difficult if you don’t know best practices and how to streamline the process. At Enavate, we put together... END_OF_DOCUMENT_TOKEN_TO_BE_REPLACED
January 4, 2023

For 10 months, Ukraine has been living in a war-torn nightmare. The attack by Russia against Ukraine directly affects the Dynamics community, with over 700 Dynamics... END_OF_DOCUMENT_TOKEN_TO_BE_REPLACED