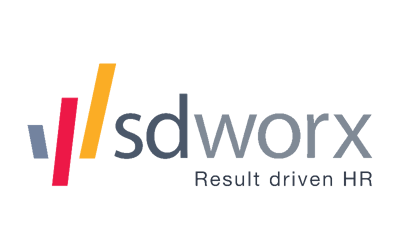 The personal connection was crucial to us. It was there not just in the sales phase but followed through into building the project.

For three-quarters of a century, Belgium-based SD Worx has ensured that workers throughout Europe get paid. Today, with a customized solution built with Microsoft Dynamics 365 and in close collaboration with ENAVATE, the company continues to be one of the continent’s most innovative and esteemed builders of payroll and human resources services, generating 4.6 million payslips each month.

Even as SD Worx enjoys a reputation as one of Europe’s most longstanding and respected companies, it constantly looks to the future, leading the way in developing solutions to help customers make smart use of IT to achieve real competitive advantage.

Growing Out of an Aging System

By the early 20th century, payroll systems had evolved well beyond the portions of salt or beer once doled out to soldiers and serfs. But by the 1950s, the typewriters, paper ledgers and eyeshades of manual payroll were being phased out, replaced by increased automation. In 1960, some 15 years after the company was formed, SD Worx launched Europe’s first technology-based payroll system.

In 2010, the company introduced the Payroll Services Alliance, the first Pan-European payroll solution.

Initially, SD Worx relied on an in-house tech team to operate and update its software. But as its customer base expanded and systems requirements grew more complicated, they gradually added a few outside contractors. Ultimately, SD Worx leaders realized their aging software solution was no longer working for them. “Belgian payroll is very specific, with very specific legal requirements,” said David Verreth, SD Worx’s unit manager for HR software.

SD Worx had been using Microsoft Dynamics AX2009 as the backbone of the X-Tend payroll solution. But the company opted to undertake a redesign and reimplementation, with an updated solution better equipped to meet the company’s complex and growing customer needs. Building a Microsoft Dynamics 365-based solution from scratch that not only met the needs of SD Worx and also its client base required a great deal of specialized knowledge and dedication.

What’s more, the company had grown as had its customers. “Just 24 of our customers represent revenue of $10 million Euros,” Verreth said. SD Worx needed a new, customized system built to its specifications.

Two-Continent Search for a Solution Partner

The company launched a nationwide search for a Microsoft partner that could do the job, but when it couldn’t find a Belgian company that was up to the task, SD Worx expanded its search. Ultimately, the company turned to Microsoft for a recommendation of a partner that had the capability to build a Dynamics 365 solution and add the customized features SD Worx needed to meet customers’ exacting and specific needs.

Microsoft’s recommendation: ENAVATE. But the idea of working with the Denver-based Microsoft Gold partner wasn’t immediately embraced by SD Worx leaders. The hesitation wasn’t due to concerns about ENAVATE’s expertise or capability; the company came with plenty of enthusiastic references in Europe and beyond. The problem was more one of geography. “We had serious doubts – to us it was a big stretch going from doing everything ourselves to putting everything in the hands of a partner on the other side of the ocean,” Verreth said.

Ultimately, it was ENAVATE Chief Executive Thomas Ajspur who convinced them. He did it by introducing SD Worx to ENAVATE’s culture of collaboration and innovation, and to the work environment he created, in which each team member is personally invested in the success of every company they work with. In addition, Ajspur met SD Worx company leaders in Belgium and assured them that ENAVATE would provide personalized and often in-person collaboration throughout the project.

“He came over here,” Verreth said. “That may seem obvious, but the personal connection was crucial to us. And it was there not just in the sales phase, but it followed through into the process of building the project”.

We were blended teams that really worked amazingly well together. We managed to blend like a well-oiled machine.

The solution is helping them live up to their mission of offering flexible solutions for payroll in a “new world”.

ENAVATE worked with SD Worx to add the customized features for SD Worx that would serve the needs of customers that include large hospitals and Belgium’s national bank. ENAVATE was able to customize the system to generate payroll and human resources-related reports for specific industries as well as customized employment agreement contracts.

A solution backed by Microsoft Dynamics 365 provided SD Worx with the confidence that their customers’ critical payroll data was secure, no matter the country. And with customizations created by SD Worx and ENAVATE, the new solution provides validation of all data to assure compliance with Belgian banking laws.

Verreth credits the success of the upgraded solution in part to the ENAVATE team’s expertise in developing the Microsoft Dynamics 365 solution SD Worx needed, and in part to the commitment of ENAVATE and its leadership and team members. “We were blended teams that really worked amazingly well together. We managed to blend like a well-oiled machine”.